Testing for COVID-19 is essential to prevent spreading the virus. It can be done in two main ways: either by PCR testing (molecular detection of genetic material) or by antigenic testing (detection of SARS-CoV-2 virus proteins). Both types of tests have advantages and disadvantages. Here is an overview of the issue to help you understand them better. 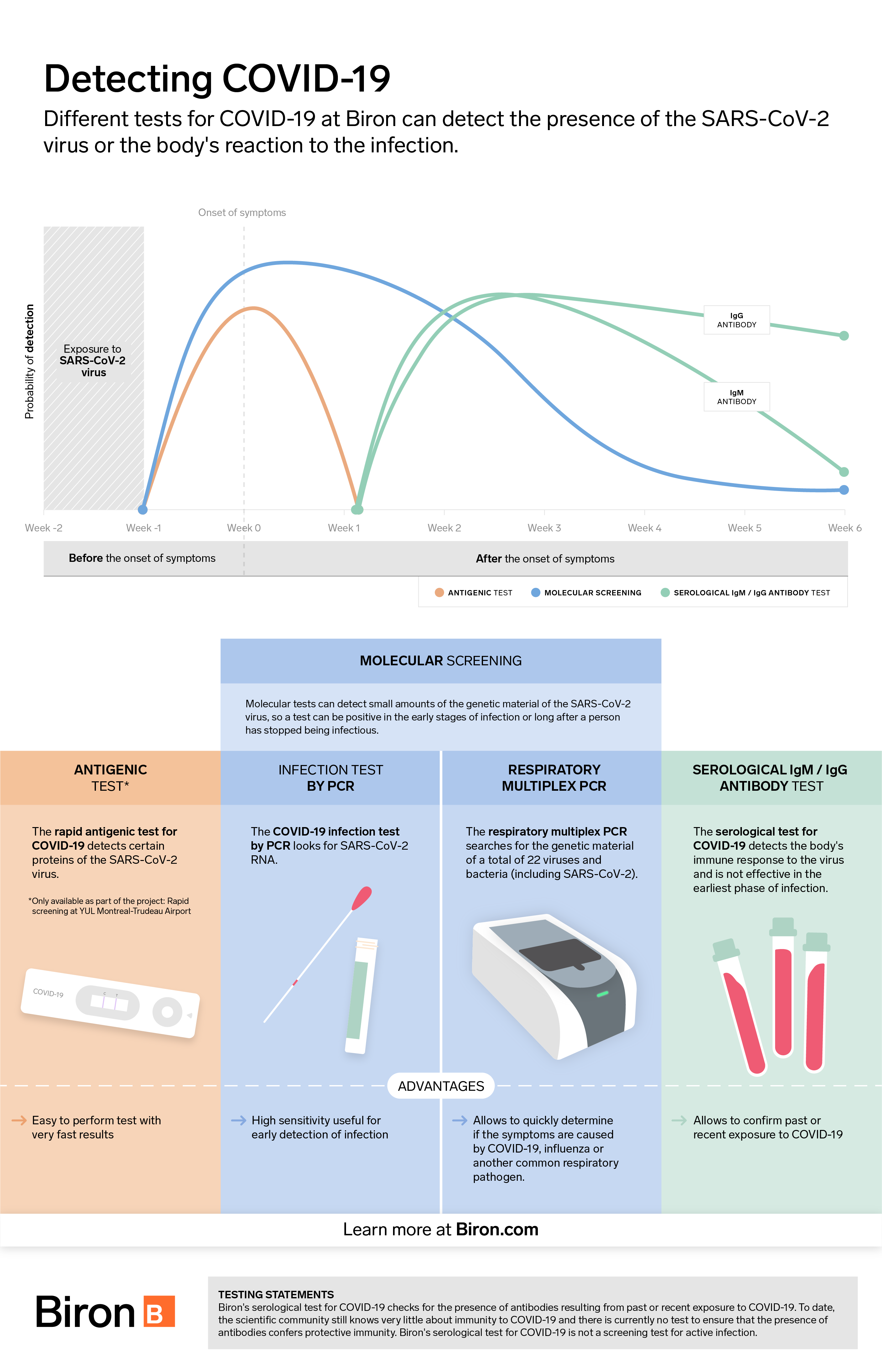 The antigen test is a rapid test that detects the presence of proteins (or antigens) associated with the SARS-CoV-2 virus inside the nose or nasopharynx. Results are available in only 15 minutes.

Antigen tests are designed for easy use without complex equipment. This is why they are less expensive than PCR tests. To date, they are not available in a self-serve version, meaning that they must be performed by a healthcare professional.

While antigenic tests are faster and more affordable than PCR tests, they are not as sensitive, i.e., able to detect smaller doses of virus. According to Dr. Michel Roger, Director of the Laboratoire de santé publique du Québec, they detect approximately 60% of all positive cases using PCR testing.

Performance varies according to certain criteria, such as the presence or absence of symptoms and the prevalence of the disease in the population tested. They can produce false negatives in infected individuals with low viral loads who may still be contagious. The results must therefore be interpreted with caution to avoid any illusion of safety due to tests which, after all, have certain limitations.

Nevertheless, these tests are considered useful in certain circumstances. Their ease of administration makes it possible to test a large number of people quickly and frequently. Some POCT-type versions allow the test to be performed on site, without sending a specimen to the analysis laboratory. This can be particularly useful in places where screening tests would not normally be carried out, such as in a factory or at the airport. This increases monitoring capacity and catches cases that would otherwise go unnoticed and contribute to spreading the virus. To date, Biron offers this type of test only to travelers at Montreal-Trudeau Airport.

The status of over-the-counter tests

Caution should be exercised with tests intended for personal use. Not only are laboratory results not easily reproducible at home, but not all of these tests are approved by Health Canada (as of January 21, 2021). In some situations, false positive and false negative rates are more common with rapid tests.

Molecular PCR (polymerase chain reaction) testing is a laboratory test for diagnosing SARS-CoV-2. It is carried out by taking a sample from the inside of the nose and throat to detect the RNA of the virus. Because it is highly sensitive, it can detect small amounts of virus and detect infections early or with low viral loads. Results are generally available within 24 to 48 business hours.

However, this type of test requires state-of-the-art equipment in a biomedical laboratory and extensive technical expertise. Therefore, access to this technology can, in some cases, be a barrier to implementing large-scale preventive screening campaigns. Nevertheless, because it is extremely sensitive, this type of test is the gold standard screening method for COVID-19.

In addition to detecting the presence of SARS-CoV-2, the respiratory multiplex PCR test provides rapid detection of influenza A/B and respiratory syncytial virus (RSV) as well as several other pathogens responsible for respiratory diseases. It helps determine which respiratory pathogen is causing the symptoms, which is particularly useful in guiding treatment, especially during the flu season.

Serological testing involves a laboratory analysis performed on a blood sample. Because it does not detect SARS-CoV-2, but only the presence of antibodies produced by the immune system after exposure to the virus, it is not used to screen forCOVID-19.

This test is primarily used to indicate whether a person has been infected with SARS-CoV-2 in the recent past. Although studies [1] are encouraging, in the event of a positive result, there is still no guarantee that the presence of antibodies will provide long-term protection against possible re-infection with COVID-19. Some studies suggest that immunity could last at least 6 months, perhaps longer. It is possible to get a false negative if the test is done too early, i.e., before the body has had time to produce antibodies (which are usually detectable in significant amounts after two weeks). Therefore, caution should be exercised.

The value of this test lies in the fact that it allows us to estimate the total number of individuals who have been contaminated by the virus, since they have not all been symptomatic and tested by PCR or antigens. This test can also be used by physicians who observe atypical clinical symptoms in certain patients who have no evidence of active infection. The presence of antibodies to the virus may indicate that such symptoms are due to a past infection.

Saliva is another type of specimen suitable to detect the COVID-19 virus by PCR. Unlike nasopharyngeal sampling, which requires special physical facilities and must be performed by medical personnel, collecting a saliva sample can be done in a variety of locations, even at home, requires only supervision by a health care professional and does not require any equipment other than the collection device.

Combining the ability of saliva tests to detect the virus in more infectious patients at risk of complications with the low complexity and cost of specimen collection, it is likely that this type of test will become part of the COVID-19 diagnostic arsenal. Saliva samples are also much more amenable to out-of-lab analysis (POCT) and, ultimately, home testing (self-assessment). Biron does not currently offer this type of test.

Other tests entering the market

Tests not approved for use in Canada are used in other countries under special and temporary registrations. Others are available on the Internet in unregulated ways. Most of them are offered for use outside the laboratory and, above all, for at-home self-diagnosis. The tests vary widely in format, from a test with a visual reading such as a "pregnancy test," to devices requiring a cell phone. The first such devices approved in the U.S. incorporated automatic communication of the result to a public health agency responsible for contact tracing.

Other methods could be marketed around the world. Such is the case for a project conducted jointly by the CHUM and Polytechnique Montréal, which uses a virus detection system other than PCR and the detection of an antigen or antibody. The technology is based on the fingerprint left by the presence of the virus when the saliva specimen is subjected to light radiation (Raman spectroscopy). This revolutionary approach would require no reagents, a distinct advantage in a global shortage situation.

Tests based on the CRISPR system

Significant efforts are also underway to try to commercialize very low-cost tests that can be done by the patient without complex equipment [2]. These tests are based on the CRISPR system (whose discovery recently earned pioneers Emmanuelle Carpentier and Jennifer Doudna a Nobel Prize). Ultimately, these rapid tests could be used by a large portion of the population given their low cost.

Screening for COVID-19 plays a key role in preventing infection and containing the virus. While some tests are highly sophisticated, none are infallible. In this context, there is no substitute for testing at the onset of symptoms or close contact with an infected person and adopting preventive and hygienic measures such as handwashing and wearing a face covering.

We offer services that can assist your doctor in diagnosing COVID-19 and other winter ailments and determining the appropriate treatment.

If you have any questions or need more information, please don’t hesitate to call our customer service number at 1 833 590-2713.

Dr Nicolas Tétreault, Clinical Biochemist, Ph.D., FCACB, CSPQ
Scientific and Innovation Director
LinkedIn
Having practiced in the public and private networks while constantly monitoring the evolution of biomedical laboratory medicine, Dr. Tétreault, a clinical biochemist, stands out for his innovative vision and unique expertise in the Canadian, American and European markets. He teaches at the Université de Montréal and regularly publishes texts intended for the general public or experts in the field.
Health A to Z

How the keto and paleo diets influence your sleep

How to talk with teenagers about sexuality