In Canada, it is estimated that one in four adults is affected by sleep apnea or is at high risk of being affected during their lifetime. In Quebec, about one in twenty people are diagnosed and receive care for sleep apnea, but 80% of those who suffer from it are unaware they have it and receive no treatment to relieve the symptoms of this sometimes silent disorder.[1, 2]

It also appears that heredity plays a large role in increasing the risk. Persons who have a close relative (e.g., mother, father, brother, sister) with sleep apnea are more likely to be affected by it themselves.

What is sleep apnea?

The term “apnea” refers to a momentary interruption in breathing, similar to what happens when diving under water. It occurs during sleep and can have serious long-term health consequences.

There are several types of sleep apnea. The most common, obstructive sleep apnea (OSA), is a chronic disorder caused by a lack of muscle tone during sleep. It can cause a collapse of the pharynx where the tonsils, uvula, and palate are located and thus partially or completely prevent the passage of air. 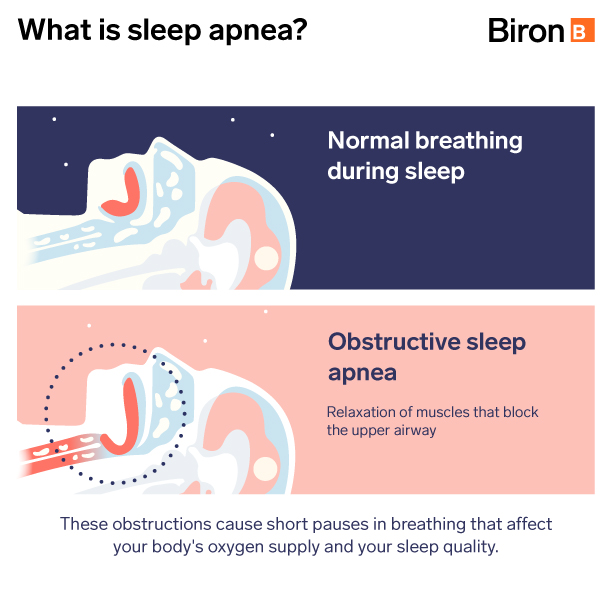 There are many factors that contribute to sleep apnea. Male gender, menopause, age and alcohol consumption certainly play a role. Science also suspects that direct or indirect genetic factors contribute to its development. Among these, some recurrent causes have been observed.[4]

Obesity
The risk of becoming obese is largely determined by heredity, with genetics influencing outcomes by 40% to 70% depending on the case.[5] This predisposition may then be partly responsible for sleep apnea, especially when excess fat is stored in upper airway tissue.

Craniofacial structure
Our craniofacial features (i.e., the shape of the bones and soft tissue that make up our face) are strongly influenced by our genetics. For example, research has shown that mandibular deficiency (small, backward tilted jaw), a narrow posterior pharyngeal space or an elongated soft palate increases the risk of developing sleep apnea.[4] Furthermore, genetic disorders such as Down syndrome and Marfan syndrome are often associated with certain craniofacial dysmorphisms that also contribute to an increased risk of apnea.[6]

Upper airway instability
Scientists believe that in some families, shared abnormalities in ventilatory control may contribute to respiratory airway collapse.[5] This would predispose subjects to sleep apnea, particularly during the light and unstable phases of sleep. 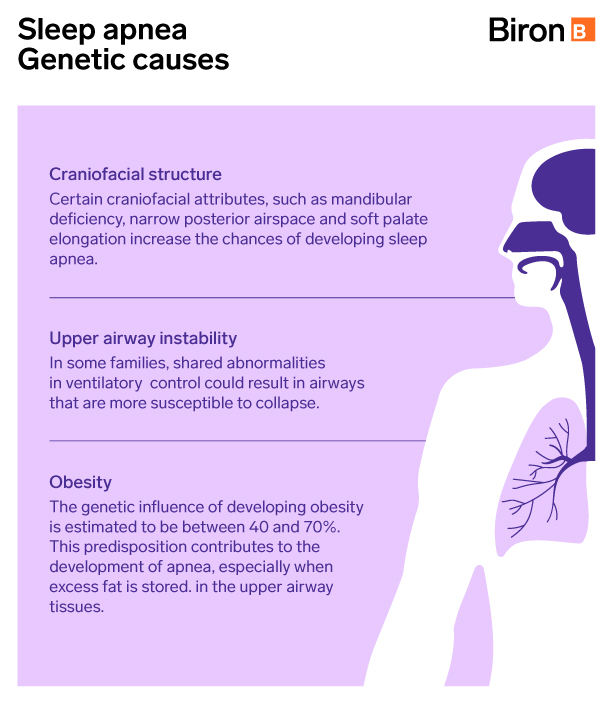 Distinguishing genetics from other factors contributing to sleep apnea

Today, researchers believe that heredity is responsible for about 40% of sleep apnea cases. This means that if a close family member has sleep apnea, it increases your chances of developing the disorder by two to four times.[2]

The scientific community is working hard to identify the specific genes involved in the process of developing sleep apnea, but the finish line is not yet in sight. It is an important effort, as it could encourage the development of new preventive methods and care strategies.[4]

While the genetic component underlying obstructive sleep apnea is still somewhat mysterious, the research being conducted today will hopefully shed light on the treatments of tomorrow.