Skip to contentSkip to navigation
ESSENTIAL SERVICES: Our services are maintained during the confinement.

What is an autoimmune disorder?

The immune system is responsible for defending the body against attacks from foreign cells and organisms: bacteria, viruses, parasites and transplanted cells. Often, the immune system goes awry and confuses some of its own tissues as foreign. The production of antibodies against its own tissues is the cause of a large number of “autoimmune” diseases. Rheumatoid arthritis, lupus, pernicious anemia, juvenile diabetes and several thyroid disorders are autoimmune in origin.

Connective tissue is found throughout the human body. It is made up of cells and rigid fibres such as collagen and elastic fibres, among others, and its role is to envelop, separate and protect other body tissues. Connective tissue envelops large organs such as the liver or kidneys, strengthens joints, tendons and ligaments, and supports small blood vessels such as arterioles. The skin is particularly rich in connective tissue.

Several diseases can result from the presence of antibodies that attack connective tissue (e.g., systemic lupus erythematosus, systemic sclerosis (hardening of tissue), Sjögren’s syndrome, polymyositis, etc.). Screening for different types of antibodies in the blood helps a clinician distinguish between different forms of autoimmune disorders in order to establish the appropriate prognosis and choose the best treatment.

Centromeres and Scl-70 are normal components of chromosomes which are found in the nucleus of every cell in the human body, with the exception of red blood cells (which have no nucleus). The detection of anti-centromere and anti-Scl-70 autoantibodies is helpful in the differential diagnosis of the two forms of “systemic scleroderma.” The more severe form is called “diffuse cutaneous systemic scleroderma” and can affect, in addition to the skin, the entire body, including internal organs such as the lungs. The form called “limited cutaneous systemic scleroderma” is generally less severe and has a better prognosis. Anti-centromere antibodies are found in 60% to 80% of individuals afflicted with the limited cutaneous form, while anti-Scl-70 antibodies tend to be present in the more severe diffuse cutaneous form.

When are these two tests prescribed?

The search for anti-centromere and anti-Scl-70 antibodies is usually recommended if an individual tests positive in an ANA (antinuclear antibody) test and has one or more of the following symptoms (sometimes referred to as CREST syndrome):

Anti-centromere antibodies in an individual with positive “CREST” symptoms indicate a very high probability for the less severe form, limited cutaneous systemic scleroderma. More rarely, positive results can be observed in other autoimmune disorders such as lupus, rheumatoid arthritis, etc. The level of antibodies found does not usually correlate with the severity of the disorder.

A negative result for anti-centromere antibodies indicates that it is unlikely, but not impossible, that the individual has limited cutaneous systemic scleroderma.

A positive result for anti-Scl-70 antibodies indicates that the individual suffers from the more severe “diffuse cutaneous” form of systemic scleroderma.

If you have any questions or need more information, please don’t hesitate to call our customer service number at 1 833 590-2712.

Are you familiar with bedside testing devices, also known as point-of-care testing (POCT)? 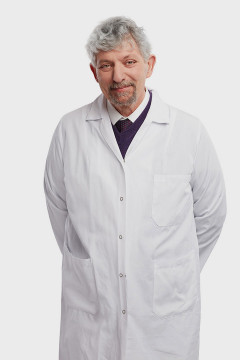 Authorities fear a second wave of COVID-19. Avoid confusing it with a cold or the flu and find out about our screening services.
Specialist Advice

Getting away from screens: not easy, but possible!

The truth about the flu