What is an allergy? 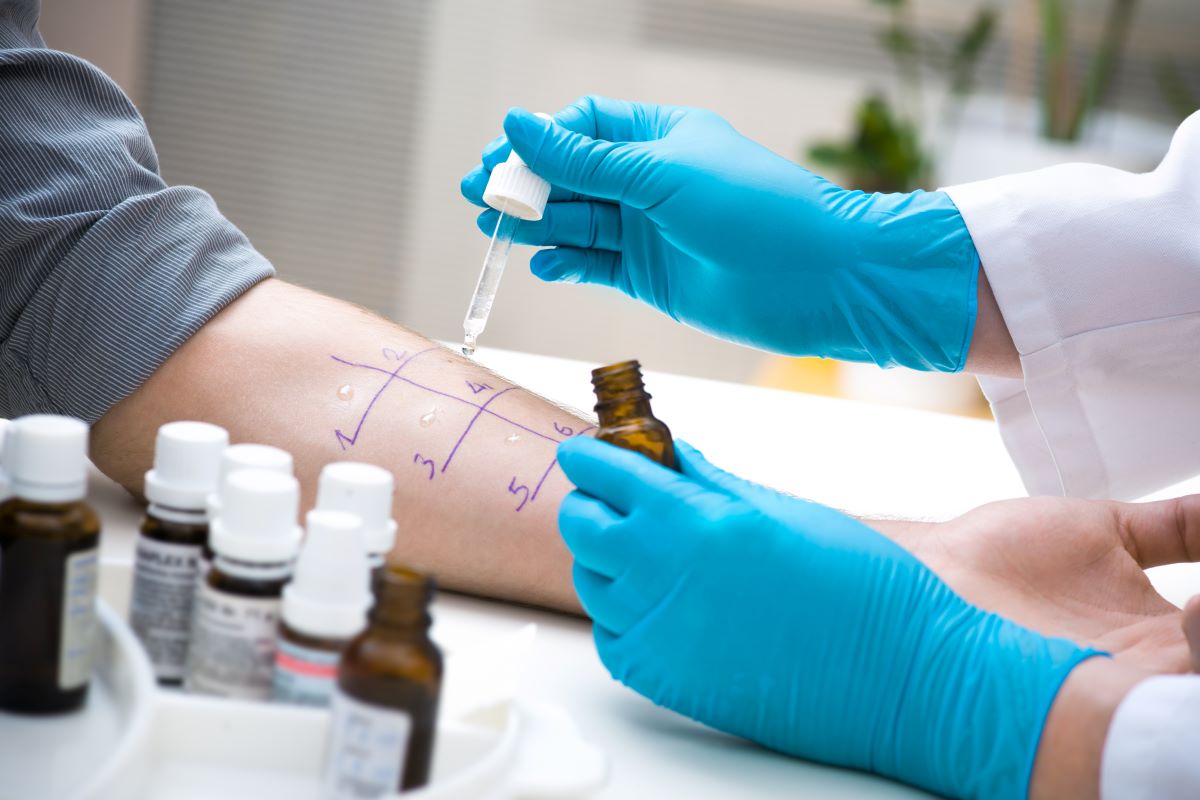 Our body fights any external enemy (e.g., microbe, virus, bacterium or parasite) with a very powerful weapon: the immune system. When this “weapon” considers a substance (allergen) that has been eaten, drunk, breathed or touched as a serious enemy, it overreacts by producing a particular type of antibody called “IgE” (immunoglobulin E) to fight it. This is the allergic reaction.

An allergy, also known as “type 1 hypersensitivity,” can manifest itself in different parts of the body such as the skin, eyes, digestive system or respiratory tract. The type of symptoms and their intensity, which depend on several factors, are specific to each person. Allergic reactions can be subtle, such as skin redness, or potentially life-threatening, such as anaphylaxis.

Allergies should not be confused with intolerance. If a reaction is not caused by IgE antibodies, it is not an allergy. Rather, it is referred to as intolerance, as in cases of “gluten intolerance” or “lactose intolerance.” For example, celiac disease, the most serious form of gluten intolerance, is the result of an inflammation of the intestine caused by immunoglobulins of type G (IgG) and type A (IgA), antibodies that are different from IgE. Therefore, the condition does not have the same mainly digestive symptoms and, above all, does not carry any risk of an anaphylactic reaction. Lactose intolerance is not caused by antibodies, but by a lack of lactase, the enzyme in the small intestine responsible for digesting lactose (the sugar present in dairy products).

Read more: Food intolerance or allergy? They are often confused, but they are very different.

Quick appointment and results. Screening of more than 650 allergens.

Some of the most common allergens include the following:

Although they are not the most common, food allergies have generated a great deal of interest due to their increasing prevalence. About 4% of the Quebec population has a food allergy. According to the province’s Ministère de la Santé et des Services sociaux, 6% of babies and 3% of children aged 10 or older have a food allergy, compared to only 1% to 2% of adults.

The most common cause of an allergy in toddlers is milk. Fortunately, this allergy disappears in 76% of cases before the age of five. In fact, most children see their food allergies (milk, eggs, soy) disappear before the age of seven, including peanut allergies in 20% of cases. It should be noted that 10 foods are responsible for more than 90% of allergic reactions and must be included in the list of ingredients of products sold in Canada: cow’s milk, eggs, peanuts, nuts (walnuts, hazelnuts, almonds, cashews, pecans and pistachios), fish, seafood, sesame, mustard, soy and wheat. These last two foods must be declared, but are rarely responsible for an IgE-mediated allergic reaction.

Allergic reactions can have minimal to very serious consequences

Allergic reactions can occur at any age, but are more common in children. The genetic predisposition to develop an allergy is called “atopy.” An atopic child may experience symptoms from birth in the form of skin reactions such as eczema, respiratory symptoms, nasal discharge (rhinitis) or other symptoms. Some symptoms may decrease or even disappear over time, while others tend to worsen over the years (asthma, anaphylaxis).

It should be noted that some atopic individuals will never have allergic reactions. They may have positive results to skin allergy tests even if they have no symptoms. In such cases, they are deemed to be “sensitive” to certain allergens and only a fraction of these people will ever have a severe allergic reaction. A British study found that barely a quarter of children sensitive to peanuts are at risk of having a major allergic reaction. [1]

Anaphylaxis is the most severe form of allergic reaction. It is sudden, widespread and, if not treated promptly, can progress within minutes to anaphylactic shock, a sudden drop in blood pressure that can result in a loss of consciousness or death. The first signs of an anaphylactic reaction are the following:

The cardiovascular system may also be affected (pale or bluish complexion, weak pulse, loss of consciousness, dizziness, vertigo or shock). The individual may even have anxiety, a feeling of “imminent danger,” headaches or a metallic taste in the mouth.

Worldwide, the prevalence of allergic diseases has doubled over the past 30 years. Nearly 40% of the population in industrialized countries is affected by some form of allergy.

By observing social and environmental changes, several experts and researchers have proposed hypotheses that may explain why allergies have increased.

The hygienic hypothesis: We are too clean!

At home, at work or during our leisure time, we live in an increasingly sanitized environment. Powerful disinfectants remove agents that stimulate our immune system, thereby reducing its ability to fight the allergens it encounters.

Some experts claim that, to have a strong and healthy immune system, we need to be in contact from an early age with viruses and bacteria that allow it to develop. This is why children who have four or five colds a year are less likely to have allergies.

According to Quebec’s ministère de la Santé et des Services sociaux (MSSS), the increase in greenhouse gases and the resulting climatic conditions, such as rising temperatures and humidity, affect allergenic plants as follows:

Therefore, climate change can have an impact on human health by increasing the frequency and severity of respiratory allergy episodes (rhinitis, conjunctivitis and asthma).

Read more: Some people can actually be clinically allergic to exercise

The diagnosis of an allergy must be made by an allergist, a health care professional specialized in this field. Although some allergies are easier to diagnose, the very large number of potentially allergenic agents, especially in the environment and in food, the possibility of cross-allergies and allergy combinations such as pollen-food syndrome or the existence of true multi-allergies, make some diagnoses particularly complex.

Therefore, any allergy diagnosis is based above all on detailed observation. The type of symptoms and the circumstances of the reaction will enable the specialist to determine the appropriate tests: a combination of skin tests and blood IgE assays. The skin test involves applying small amounts of extracts of the suspected allergen (peanut extract, milk extract, animal allergens, pollen, etc.) to the skin of the arm to study the cutaneous reactions. Blood IgE assays involve bringing a drop of blood into contact with the same raw extracts of the suspected substances to detect the presence of specific IgE antibodies.

In some cases, a definitive diagnosis of an allergy (or the absence of an allergy) can only be based on provocation testing, which involves administering a preparation of a suspected allergen orally (food allergy) or by inhalation (respiratory allergy). Since some individuals may experience symptoms as severe as anaphylaxis, it goes without saying that these tests can only be performed by experienced personnel in well-equipped clinics.

For several years, allergy specialists have had an additional tool at their disposal to diagnose and possibly treat allergies: molecular allergens, or pure allergenic components. In the case of a peanut allergy, skin or blood tests have always been performed with raw peanut extracts containing dozens or even hundreds of potentially allergenic components. Research conducted in recent years has made it possible to isolate and manufacture in the laboratory the most suspicious components of the peanut, which are called “rAra h1,” “rAra h2,” and so on.

Most people know that symptoms of a seasonal allergy can be relieved by taking antihistamines or nasal corticosteroids. Asthma symptoms can also be relieved with a bronchodilator and corticosteroid pump. There is also a sublingual desensitization treatment in tablet form to treat rhinoconjunctivitis caused by dust mites, grass pollen and ragweed.

In the case of food allergies or insect venom allergies, the importance of an epinephrine auto-injector (EpiPen®) is well established: it must be used quickly as it is the treatment of choice and can save lives in cases of anaphylaxis.Over the years, other medications have been added to the kit to reduce the severity of an allergic reaction. Recently, dupilumab (Dupixent) and omalizumab (Xolair) have been used to treat more severe cases of eczema, hives or asthma. These very useful, even essential, drugs do not, however, cure allergies. In the case of food allergies, it is obviously possible to avoid eating a particular food, but it is much easier said than done!

To cure an allergy, the immune system needs to be re-educated so that it stops considering an allergen as an enemy molecule that it must eliminate. For environmental allergens such as pollen, dust mites and insect venom, this desensitization is achieved by injecting ever-increasing doses of the allergen under the skin. Desensitization occurs over a period of at least three years (or more, especially in the case of venom). In some cases, molecular allergens could reduce the duration of the treatment.

For food allergies, oral desensitization is the most innovative treatment. Inspired by subcutaneous treatment, it involves administering increasing doses of the allergen, this time by mouth.

In 2018, the first oral immunotherapy clinic in Quebec opened its doors at Montreal’s Sainte-Justine Hospital and has been a resounding success … with a long waiting list..[3] In response to this enthusiasm, the Montreal Children’s Hospital followed suit by also offering this innovative but difficult-to-access method.

With respect to allergy prevention, another new idea is gaining ground: instead of delaying the introduction of certain foods to infants, it is proposed to introduce potentially allergenic foods at an earlier age, meaning around four to six months for peanuts (provided that the texture of the preparation is suitable for the age to avoid any risk of choking).[4]

From the early introduction of allergenic foods to sublingual desensitization, the impending development of a vaccine [2] and the increasing accessibility of molecular allergens to detect and treat allergies, this vast field of medicine is constantly evolving. Breakthroughs in research are promising and expected to rapidly reduce allergic problems in a large number of individuals.

This text was written with the assistance of:

For professional support, we are here to help you.

You have more questions?