It is no secret or surprise that the fight against the pandemic has placed an enormous strain on public health. Many resources, both human and material, have been diverted from their primary mission in order to support the fight against the virus. In addition, confinement measures have made it more difficult for the population to access some services, particularly screening tests. As a result, new outbreaks of sexually transmitted and blood-borne infections (STBBIs) have likely gone under the radar and a rash of new infections in the coming months is feared.

The varied and unpleasant symptoms of STBBIs

STBBIs are numerous and have different severities and symptoms. Here is a brief reminder of the main ones [1] : 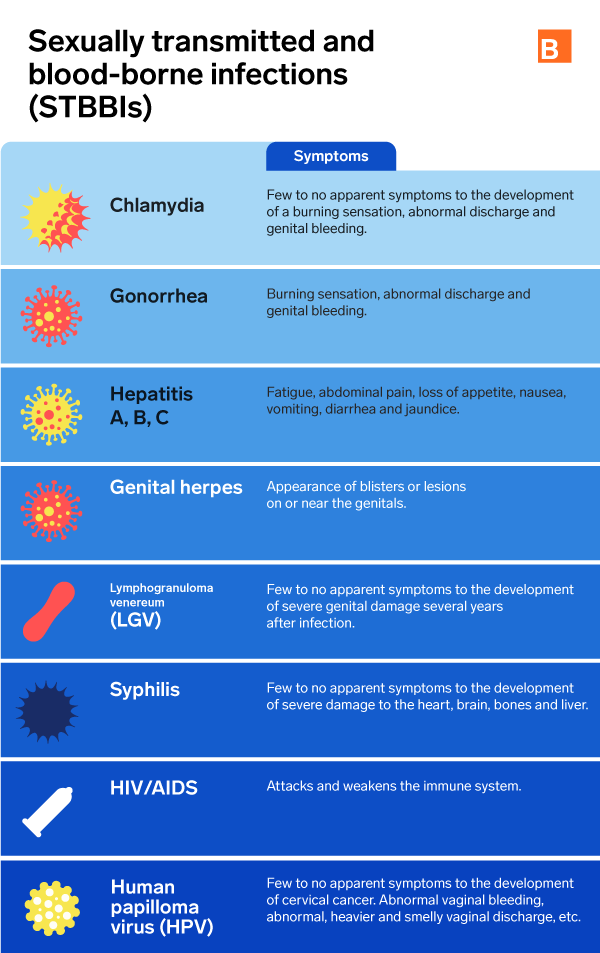 The impact of the pandemic on STBBI screening

The issue of screening is crucial because, for many of these infections, symptoms are not always apparent or take time to appear. This means that women and men can be carriers of a virus without even knowing it. What’s more, the pandemic has made the fight against STBBIs more complex. Because the same resources (i.e., laboratories, swabs and infectious disease specialists) are used to detect infections for both COVID-19 and STBBIs, many screening appointments had to be postponed until restrictions were gradually lifted. [2]

What is an STBBI and how is it transmitted?

The latest figures for Montreal show a 70% increase in STBBI infections in June 2021 compared to the beginning of the pandemic. STBBIs are also believed to be on the rise in the rest of the province and country. However, is this increase due to the lifting of restrictions or the lack of testing during the pandemic? “We’ll have to wait a few months before we can know for sure,” says Dr. Sarah-Amélie Mercure, a preventive health specialist at the Direction régionale de santé publique de Montréal.[3] It is still too early to determine whether these infections occurred during the pandemic and were detected late or whether they are the result of a recent surge of cases due to deconfinement and increased unprotected sexual activity.

Syphilis is believed to be the most active STBBI in Quebec, but a strong resurgence of HIV has also been noted. The Canadian AIDS Society estimates that 14,000 people in Canada are likely living with AIDS without knowing it, including 3,000 in Quebec alone. Gary Lacasse, Executive Director of the Canadian AIDS Society, estimates that the increase in undetected transmission ranges between 14% and 20%. Furthermore, those who are unaware of their infection increase the risk of spreading the virus to others through unprotected sex.

Dr. Réjean Thomas, a specialist in the fight against STBBIs, also notes that those getting infected are younger. “We told them to wear a mask, but we didn’t tell them to wear a condom!” he says. Although international public health organizations had set their sights on eradicating AIDS by 2030, the pandemic could significantly delay this deadline.4

The issue of prevention

Dr. Mercure notes that only 60% of young people say they used a condom or dental dam the last time they had a one-night stand. She reminds people that condoms remain the most effective way to prevent STBBIs, even if they do not provide 100% protection. In fact, only total abstinence eliminates the risk, but it is a bit radical, we must admit.

The truth about five common STBBI assumptions in Canada

It is advisable to adopt safe behaviour, especially for young people, by protecting oneself and limiting the number of partners (and the risk of infection). Ideally, a person should be tested before each new partner and remain monogamous until the end of the relationship. When in doubt, it is strongly advised to get tested immediately. In the event of a positive test, a medical follow-up should be carried out as soon as possible, since an infection that is treated in time significantly increases the chances of recovery. It is also possible to get vaccinated against hepatitis A and B and HPV.

We provide a wide range of services for STBBIs. Screening test results for chlamydia, gonorrhea, syphilis, hepatitis B and HIV are available within 24 hours. A doctor’s prescription is required.

Do you have a doctor’s prescription for one of these tests? Make an appointment online or call Biron Health Group’s customer service at 1 833 590-2712.

Sports and puberty: The price of performance

Fasting to lose weight: Is it safe and effective?

New developments in contraceptives for men